Muskoka Algonquin Runners hosted its first “Run To The Pub” event today.  Over a dozen runners braved the cold and dark and many more joined them afterwards at the pub.  The event was a huge success.  We still can’t find Doug……

There were many great new ideas for the club for 2014.  Meeting minutes here.  We hope to have membership and gear details for 2014 sorted out by mid December.  Stay tuned.

We welcome onto the MARS executive, Barb Hesk as Secretary and Katherine Ahokas as Director of Merchandise.  We bid farewell to outgoing Secretary Dave Gibson who could be heard muttering “it’s about time” under his breath.  Pierre Mikhail (President), Troy Cox, Dave Johnstone (both VPs), Louise Choquet (Registrar), Holly Groome (Treasurer) and Lianne Atwood (Contact for New Members/Member At Large) are all thanked for remaining on our executive.

There was consensus to continue The Run To The Pub as a monthly event.  Mark your calendar with Thursday December 19 as the next event, 4:30 pm River Mill Park to run and 5:30 pm at the pub.  We may move the day of the week to Wednesday in the new year to accomodate the Thursday long run at noon.

Our winter program begins Tuesday December 9 and is 24 weeks long, ending with Marathon/Half Marathon in Vermont May 25.  The three key workouts of the week are posted on the website through the end of January so far, with Tuesday and Saturday morning workouts at 6:30 am (60-90 minutes) and long runs Thursday at noon.  Details can be found at our calendar.  We welcome runners of all abilities and of course you do not have to come to Vermont to run with us.  The first mile of our long runs will be a “social mile” before runners head off at their own pace.

See you out there running!

With snow falling, it’s time for MARS to turn its back on the fall and embrace winter.

On Thursday November 28, MARS will host a Run To The Pub event, open to club members and anyone interested in learning more.  We will meet at 4:30 pm at River Mill Park for a run and head to the pub at 5:30 pm.

The MARS winter program will officially begin the week of December 9 with scheduled runs each week on Tuesday, Thursday and Saturday, as well as The Sunday Morning Running Group in Huntsville, Ontario on Sundays:

The weekly schedule of runs will be posted at our Calendar tab with goal races of a spring half or full marathon.  Check the calendar before attending for any last minute changes.

MARS is heading to Burlington, Vermont May 23, 2013 for the May 25 Vermont City Marathon.  Registration for the full marathon is open.  Relay registration for either 2 person or 3-5 person teams opens February 1, 2014.  Info can be found here.

The schedule for the Orillia Snowflake series is out here.  These races are scheduled for December 1 and 15, and January 1 and 12.  The races are all 5 km with a 10 km option on January 1. The cost of these races is $15 plus a donation to the Foodbank.

Information about Membership renewal for 2014 will be available soon at the Membership tab at this website.  New members and renewals both require completing an Athletics Ontario form for insurance reasons.  Stay tuned in December for more information.

See you on the roads, however cold. 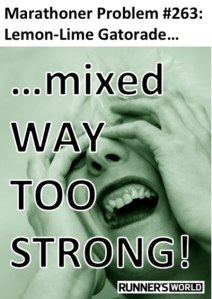 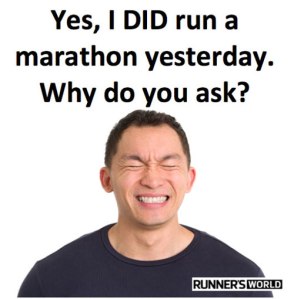 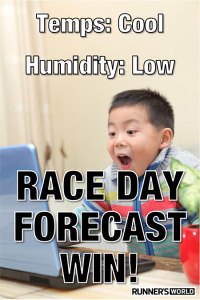 See how many MARS runners you can pick out here

Muskoka Algonquin Runners may have had its defining race as it approaches the end of its first year in existence, at the Athletics Ontario Cross Country Championships November 17, 2013 near London. Ten dedicated Masters Runners were joined by 3 high school athletes at the event which had approximately 1000 runners, representing the best cross country runners in the province.  High school athletes Graham Shearing, Jason Doetsch and Josh Stevens capped superb seasons with one more race against Ontario’s best, and proved they belonged.

The MARS Masters entries included 3 team entries.  Masters teams can have a maximum of 4 runners each, with the top 3 results counting towards their score.  The races are run in 10 year age blocks (30-39, 40-49, etc), and teams are entered in the age group of the youngest runner on the team (so a 42 year old can run on a 30-39 team).  The MARS entries were in Men 40-49 (Troy Cox, Mark Sinnige, Pierre Mikhail); Women’s 30-39 (Jess Sheppard, Katherine Ahokas, Helen Dempster), and Women’s 40-49 (Tina Steele, Paula Driedger, Catherine Smith).  In addition, Lowell Greib competed in the men’s 30-39 category.

The Masters race took place at 12:30 pm in warm 15C weather and boasted approximately 140 runners.  Troy Cox placed 9th overall despite a serious injury.  His 40-49 team mates Mark Sinnige and Pierre Mikhail, finished soon after in 18th and 19th.  The team captured first place in the 40-49 age group with a total score of 46.  Troy also placed 2nd overall in the his age group.

In the women’s 30-39 team event, Jess Sheppard, Katherine Ahokas and Helen Dempster placed second overall.  In addition, Katherine was the 4th woman overall with Helen right behind her in 5th.  Helen and Katherine placed second in their respective age groups, with Jess placing third.

It was a fantastic day for these masters runners, many of who have been meeting early Tuesday mornings all fall to train and also helping to coach the high school cross country team.

MARS takes a break until Thursday November 28.  Please come out to our “Run To The Pub” event that day.  Invite friends who are not club members to join us and learn more about running opportunities in Muskoka.  We will meet at River Mill Park at 4:30 pm, go for a run and then head to the pub at 5:30 pm.  We are interested in hearing ideas for the next year.

Finally, don’t forget the MARS road trip to The Vermont City Marathon.  We depart May 23, and race and return May 25.  Entries are open for the race already and the relay lottery (2 or 3-5 member teams) opens February 1, 2014.  Details can be found here.

See you on the roads. 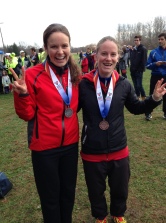 Kat and Jess pose with their second and third place medals 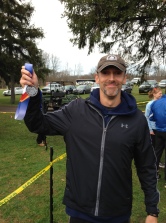 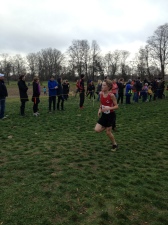 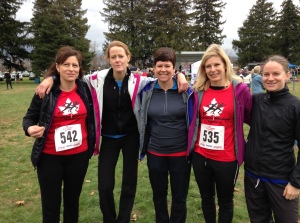 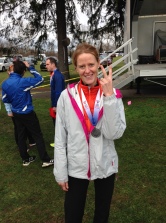 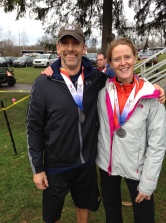 Troy and Helen pose with their second place medals 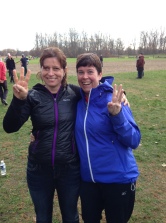 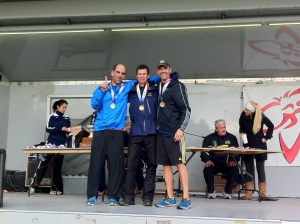 Muskoka Algonquin Runners’ fall program is coming to a close with an exciting weekend ahead.

Following the races this weekend, MARS will take a break from its Tuesday workouts and next meet Thursday November 28 at 4:30 pm at River Mill Park for our Run To The Pub event.  Club members will welcome anyone wanting to find out more.  We will go for a run then head to the pub at 5:30 pm.  There will be a club executive meeting and club members are welcome to participate and take on new roles.  The club is interested in any ideas that promote running in Muskoka and help the club to grow.  We are also interested in anyone interested in helping to lead runs.  Workout dates and details will continue to be posted at our Calendar tab.

MARS is planning a spring road trip to the Vermont City Marathon.  Several members have already registered and registration is still open here.  Burlington is a beautiful Vermont city and well worth a visit.  If the marathon distance is intimidating, why not consider the Marathon Relay event.  There will be both 2 person and 3-5 person teams permitted.  Team entries are by lottery.  Entry for the relay opens February 1, 2014 and a draw will be held after entry closes February 28.  Changes are permitted until May.  Why not consider joining us in Vermont?  We will depart Friday May 23 in the morning and return late May 25.

Finally, MARS has been welcomed back to Craftsbury Outdoor Center in Vermont for the High School XC Camp.  Last year, 11 high schoolers from Huntsville joined 20 others from the US, to train with Olympian and three time World XC Champion, Lynn Jennings.  We hope to take a dozen runners this year.  Registration this year will be limited to 25 runners only and is expected to fill quickly.  Information can be found here or by emailing Pierre Mikhail. 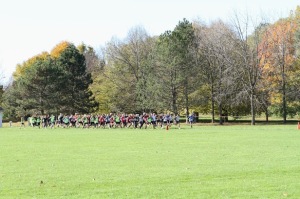 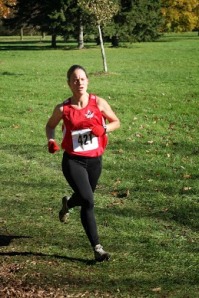 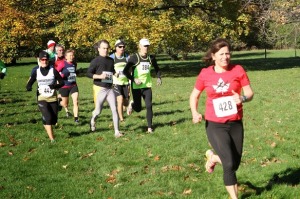 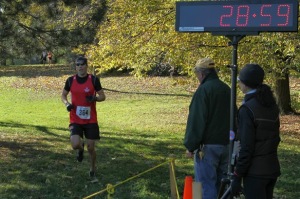 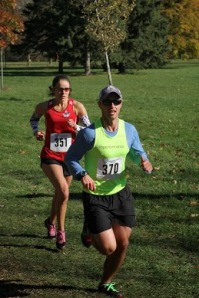 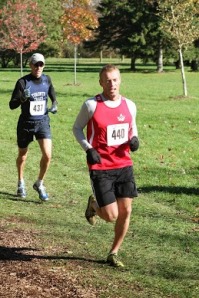 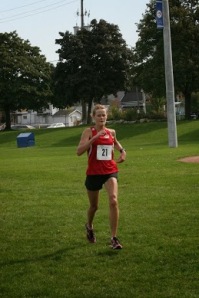 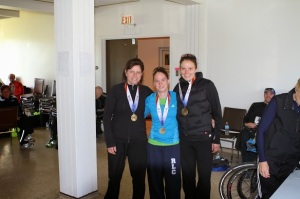 It’s been an exciting week for cross country runners in Muskoka.

On Saturday November 2, 19 high school runners and their supporters descended on Sudbury to compete at the provincial championships, known as OFSAA. Huntsville qualified its Junior Boys, Senior Girls and Senior Boys teams as well as individuals Emma Mensour (midget girls) and Sabrina Schaly (junior girls). This was the largest group of Huntsville runners attending OFSAA in over a decade. All three teams placed in the top 20 in the province with13,14 and 18th place finishes respectively. Each race had just under 300 runners with four top 60 results for Huntsville (Emma Mensour 42, Josh Stevens 49, Adam Lavigne 50, Mariah Smith 58). Most of Huntsville’s runners improved significantly on their times from the pre OFSAA race on the same course in late September. Congratulations to the Hoyas!

On November 3, MARS Masters XC runners traveled to Sunnybrook Park in Toronto to compete in the third event in the Breslin Cup, a 4 race series. This race was an 8 km race. Two MARS teams were entered. The team of Kat Ahokas, Jess Sheppard and Tina Steele placed first in the 30-39 women’s team category. Troy Cox, Pierre Mikhail, and Roger Penney placed 2nd in the men’s 40-49 age group, with Cox placing 4th overall.

Congratulations to all Muskoka XC runners! MARS continues its hard work this week with a track workout Tuesday and a 5 km time trial Thursday, both runs at 6:30 am at Conroy Track. The club is gearing up for its biggest and season ending race, November 17 in London at the Athletics Ontario Cross Country Championships. The club is still looking for more runners to join us. 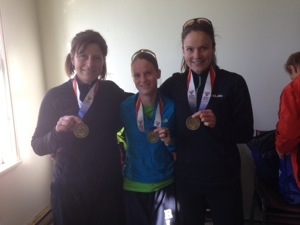 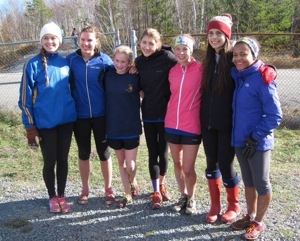 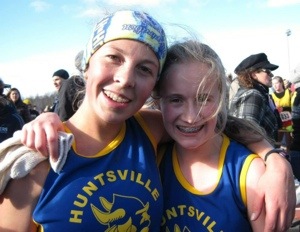