“We Won!”  That scream had not been heard emanating from a Huntsville High School Running team in over 15 years at the Georgian Bay Simcoe Athletic Association Regional Championships (GBSAA), a qualifying race for the provincial finals (OFSAA).

Minutes earlier, a team of five senior boys lay in a heap at the finish, with a pile of teammates on top of them, and some vomit underneath them.  There were tears (ok, I’ll be honest, most of those were mine!), and a true sense of team accomplishment not just from those five boys, but from an entire team that had propelled them forward. At that point they did not know what place they had come in, only that they could not have possibly run harder for each other.

To truly understand what they had accomplished we must travel back four years.  A bunch of grade nine boys were playfully labeled “the lost boys” by one of our coaches, as they had great difficulty following simple instructions and even greater difficulty making their way once around a 400m track.  At the end of his first year, one of the current captains of this year’s championship team, Josh,  announced “next year I want to complete a workout without stopping”.  As the years passed this group of boys along with an entire team, made slow, tentative steps forward.  When asked what their goals were this year, they confidently announced “Win GBSAA”.  While I was excited that they had a goal, I was worried for them because they had never come close to this in the past.

Something was different this year.  For the first time , the athletes completely bought into the notion of team.  The six runners (five runners and one alternate) on this qualifying team were Ben, Alex, Josh, Austin, Bryan and Jason, with a supporting cast of Chris, Orion  and their co-captain and team leader extraordinaire, Patrick.  Ben had not run on the team during high school prior to this year as he is a talented, multisport athlete whose soccer team commitments conflicted with running.  Fortunately, he happened to see the team busting its collective butt several days doing track intervals and realized something special was happening.  This was a team that was suffering together, for each other.  And so, Ben found a way to juggle his commitments and competed in two sports. Alex balanced his huge swim team commitments with running. Austin and Jason worked hard at every practice and “the lost boys” Bryan and Josh became true leaders, the “glue” of this team.  When energy was low, school overwhelming or practices feeling repetitive they kept the team focused on their goal.

The kids trained 5-6 days per week and raced often but their goal was their late October GBSAA race.  They raced tired and trusted that their coaches would have them rested for the race that mattered.

Race day was cool, wet and muddy.  The boys were focused and nervously waited almost 5 hours as five races took place before theirs.  They cheered on as 4 of their team mates qualified for OFSAA as individuals, a very difficult task.  The accomplishments of Shannon, Mariah, Jocelyn and Adam helped them believe that their goal could  be accomplished.  They lined up after their warm up and waited……..this is where the cowbell comes in.

All season, the runners practiced every facet of race day, from breakfast, to warm up, to starts, to in-race strategies and finishes.  One of the team mantras was “No one beats a Hoya in the last third of the race; no one comes near a Hoya in the last 800m”.  At these regional races, the top two teams qualify for the provincial championships, with the lowest aggregate of a team’s top 4 runners winning (so, if your runners come 1,2,3,4 your score is 10).  The runners were aware that a coach would be standing 800m from the finish with a cowbell.  When they heard Coach Dave’s cowbell, they would remember all the hard 800m repeats they had done in practice and fly to the finish.  They had already witnessed magnificent finishes from many of their team members.

As the gun went off, I stood at the top of the first and most brutal hill, about 400m into the race.  I was filled with doubt.  Had we prepared them properly?  Were their own expectations too high?  Their results all season had been fairly mixed.  One of our best runners, Alex, was very nervous, as he had failed to finish this particular race two consecutive years and was worried he may let his team mates down.  They were on the line with 125 runners and knew that their would be temptation to start too fast, often a deadly error.  They also knew that we had preached “risk everything”.  It was unbearable waiting for the start, knowing that knife edge that they were about to walk, or run.

The gun went off and as the sea of runners crested the top of that first big hill, I was horrified to see all of our top runners in the top 12 racers, Ben casually waving to the crowd!  I felt sick.  “They’ve gone out way too fast, they will be so disappointed”.  We had failed them as coaches.  I would not see them again until 400m from the finish.  I waited nervously with Alex’s mom, probably the only person feeling sicker than I did, worried that her son might not be ok.  I knew the sound of cowbells would tell me how we were doing.  Twenty minutes passed as we waited for the 7 km race to play itself out.  Finally, the first runner came through the trees into the clearing, then the second, third and fourth but no Huntsville runner.  I felt desperate and worried for the well being of our runners, both physically and emotionally.  I thought to myself “we need more cowbell”.  And then it started, the beautiful and nearly continuous ring of cowbell for a full minute! The fifth runner into the clearing was magnificent Ben, no longer smiling and waving, but hammering his way to a 5th place finish.  As the cowbell stopped, I heard the shriek of joy from Alex’s mom, as he emerged for the first time ever from that clearing, in 8th place.  Alex was followed shortly by Josh in 11th and Austin in 14th.  Four runners in the top 15! I tore down the hill to the finish and arrived just in time to see Josh and Austin collapse across the finish line.  Bryan and Jason followed shortly and as they all lay in a heap on the ground, an entire team celebrated their effort.  They scored a remarkably low 38 but waited nervously knowing the results would be close.

The “We Won!” scream followed four years of hard work, slaying of old dragons, and emanated collectively from a team that would not allow them to quit.   We need more cowbell. 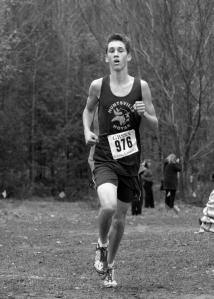